Section 1: The Build up

The intro to both of these scenes start with Guts being persuaded to ride a guy and his daughters cart. During this Gut’s falls to sleep in both and the dream sequences are unique to both. Despite the fact that they both start very similarly the anime shows a flash forward and premonition of what’s to come / what’s already happened – I’m not really sure as I’m not caught up yet – but if it is a moment from the future it really sucks. This is because it takes the human part that’s left from Guts to make him some kind of magical oracle which isn’t as interesting in my opinion.

Even if it’s not, the flashback to the past is really annoying as it probably won’t be explained and is just the remains of the previous arc or films that took place. This annoys me a little as it could be a potential spoiler for people who’ve not read the manga yet and I’d hate to be spoiled early. As well as this, the fact that something terrible has happened to Guts is already apparent in the manga and the fact that the anime decides to show this through flashbacks show its incompetency when it comes to the minor details. To me it also feels like it’s using a cheap method to try and make you continue watching which is so obvious to spot that it outright puts me off.

Another difference during the dream sequence in the manga was that Guts had already lost his prosthetic arm whereas in the manga he lost it half way through. This is so minor and not really worth criticizing but I feel like in the manga losing his arm could be symbolism for his loss of hope or realisation that he was in a whole lot of trouble, this moment didn’t happen in the anime but I don’t think they could have made it good if it did so I’m not going to complain. 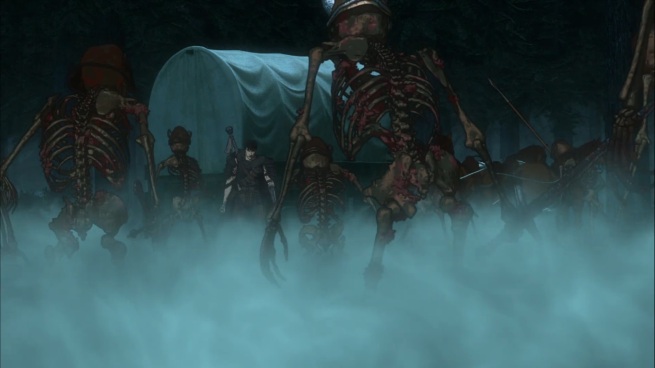 Both of these scenes come with a strange plot hole of the skeleton vanishing after stabbing Colette as both deaths happen extremely close to the cart and when you pan out theirs no skeleton there. As well as this the method that zombie Colette used to get into the cart is ambiguous (for both) at best but the outcome is the same for both.

The thing is that the emotional outcomes for both are extremely different. For the manga Guts is in extreme shock and it mainly focuses on his reaction and his face which shows that he still has at least a little empathy left, we can see the psychological damage in his eyes and find it no shock when the girl stabs him with no warning as you’d understand his trauma.

The anime decides to do this a little differently because they don’t know how to make Guts’ face look shocked it’s strange to think why he’d let a corpse attack him whilst it’s moving so slowly, continuing to make him appear weaker.

This is when the anime makes the stupid decision to create a tree monster to eat the search party looking for Guts (it’s not there in the manga) and if the terrible skeletons didn’t cause you to dislike the show, this will, not just because the tree looks terrible but because it essentially proves that Guts can’t die or become more injured than he already is. A humongous terrifying tree monster would break Guts’ limb by limbs quickly as well as eat him straight away like the other bandits. But making Guts hover over the tree’s mouth, getting captured in a really stupid way downplays all tension removing any possible shock from future scenes.

I know that you can argue that there’s a huge flash back and an insanely large amount of chapters for the manga giving Guts plot armour but that’s not really too much of a problem as the manga already has other great ways to create tension e.g. other character deaths.

Section 3: So how does this miss the point?

These two posts analysing the scene from Berserk make it massively apparent how Berserk 2016 misses the point. Bad directing and animation aside it feels as if the motives behind each one are completely different.

The anime is attempting to be a fun action show, proven by the abundance of fight scenes in contrast to the slow parts of the manga. This is completely the incorrect way to adapt Berserk as the main appeal really isn’t the action; it’s the characters and story.

The pointlessly long action fights completely ruin this first episode and don’t do nearly as much world building as even the first chapter (though it’s like 90 pages long anyway) completely ruining the great tone of the series. In the next part of my Berserk series I will talk about the differences in soundtracks of both versions of the anime to continue explaining how Berserk 2016 completely missed the point.

As I schedule all my posts in advance (I’m currently writing this on the 25th of march) the Berserk 2017 season would have started already without me talking about it, due to this I will probably not be talking about it for at least another two months. As well as this after the OST post about Berserk this series will go on a hiatus until I at least catch up with all the content in the manga that the anime’s cover. Sorry about that, I’m a quick reader so if theirs a demand for it (and you comment about it) I will probably reschedule everything so that the Berserk posts come out continuously instead of separate from each other – this depends on how much I read from today though.