I had high hopes for this movie coming from studio Ghibli and my track record with them however I came out having enjoyed it, overall disappointed. And whilst I can dissect the themes which created my disappointment and how they artistically contribute to a greater message or value I’d much rather talk about why the romance didn’t interest or connect with me at all.

As a disclaimer to anyone who is thinking about watching this film, it’s good and interesting to watch but the ideas and story aren’t really compelling specifically the romance which I will get into now.

Successful romance anime combined with drama have huge conflicts which are so satisfying to see solved that you spend the next three minutes celebrating to yourself with no audience. These issues are often relatable, make sense and overall grip you to feel compassion and empathy for the characters involved if the situation calls for it.

This is best done by making the viewer want the couple to succeed. This can be done in a variety of ways such as making you like both of them or presenting a consequence for if they don’t or just a good motivation. You saw the title; this review is going to be about how this film messes it up! 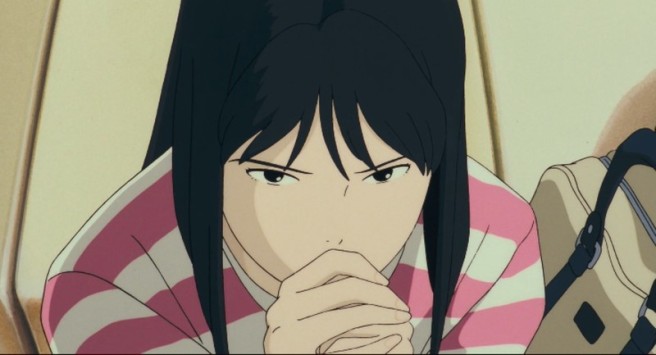 Rikako comes across as a lying, scheming, manipulative, selfish bitch. And Taku comes across as a normal nice guy. So when they are eventually left with a chance for the two to become a couple you’re left with mixed feelings. Its’s as if Rikako’s taking advantage of him and it’s a terrible feeling to end a movie on.

When I say “Studio Ghibli Film” people leap to Miyazaki but he didn’t actually direct this one. This could explain the quality and execution of the romance. However Tomomi Mochizuki has worked and directed many other great anime’s most notably season one of “Ranma One Half” which I loved so I feel like this could just be my disagreement with an artistic message instead of simple incompetence. After all, nothing bad could ever possibly come out of studio Ghibli! Yeah… Yeah…

Is it just me or is someone who’s constantly crying to get what she wants, constantly getting people to go well out of their way to do insignificant things for no reason and spoilt by their parents the most insufferable character in existence. And studio Ghibli doesn’t use an art style good enough to make these criticisms seem light, if you know what I mean.

The story just feels incoherent and stuck together. I honestly couldn’t tell you if the whole film was a flashback ending in the present or not. And plot points were introduced with seemingly no relevance.

The first part of the film is basically useless because nothing important happens which couldn’t be summarised in a short few minutes. It’s good movie practice to start a film as late into the overall story as possible as to not bore the reader with an intro where they can’t see where the rest of the plot is going. You do not want to hear “And this is when it all started” 20 minutes after the film starts! Just cut it out! DELETE! DELETE! DELETE! Establish everything as it goes along! The way the plot works leads to a point where this is entirely possible if they just do two things.

The first is to completely ignore the school trip cancelation plot line since it was only ten minutes, offered nothing to the rest of the film and ended up on the trip anyway. Then you start the film when the girl wants to be leant money and he needs to go to the elevator to get it. It would have been a much better film in my opinion if they just explained everything in that elevator and continued the story right from when he gave her the money! That’s just my personal opinion though, I believe the characters have enough personality and intrigue to make you continue watching and enjoying them without the opining setting them up for you. Ghibli have the animation to express emotion and thought so well anyway.

A lot of events that happened kind of felt there to pad out the movie. Whilst a lot of them I can identify for artistic purposes they weren’t really expanded enough on to be compelling or thoughtful, they were kind of just there, which is one of the worst things a film can be.

Don’t get me wrong, it’s still Ghibli and it was still an enjoyable ride which I don’t regret watching too much since the ideas were interesting to think about and it’s rare to see a female character so realised that you can question their true nature so deeply and feel so twisted about. It’s only around 70 minutes so why not check it out?