I knew before watching that this would be the episode where Shinji runs away, it seems like I was wrong earlier and I had watched 4 episodes instead of 3. Anyway this was the episode that I initially dropped the series on and it’s not too difficult to see why. Content wise this episode was very skippable but there were many more personal moments that saved this episode.

Effectively the episode is extremely self-contained and skipping it could make you believe nothing happened. Basically Shinji runs away at the start then comes back at the end.

To finish the volume of notes to post length ratio idea from the previous episode review I realised that the difference between this and Shiki is a lot more huge since I’m not talking about what I think will happen before watching, answering if I was correct, or saying what I want to happen in the future and react to that. So yeah this project is going to be huge!

We open to learn that Shinji isn’t badly injured like we once thought but just skiving; the stress has got to him. Then we learn that the stress has really gotten to him and he escapes! Misato is understandably annoyed but it’s hard to tell if it’s just because she lost a pilot or it it’s more personal than that.

Shinji listens to a tape as he escapes on the train. It looks like he constantly listens to the same one or two tunes because whenever we view his device he’s always switching between the same things. These must particularly resonate with him. I find it really strange how he sits there in the exact same place and position keeping to himself. I wonder if he’s just focussed on his memories, worried about being spotted or just naturally stationary. I found this whole train scene really strange because it was a little confusing.

The train started with a small amount of people which continued to grow over time as other people and school children got on. Then it emptied and morning turned to night. Once this happened it showed the train becoming more and more crowded again which means he wouldn’t have gotten off and just stayed on the train. This basically means that Shinji wants to leave but can’t force himself to move, the rest of the episode makes a lot more sense if you assume he went off at the same stop he got on at.

He goes to a lonely cinema to what looks like the most boring film ever made since nobody there cares about it. There is a couple who are basically making out in front of him and it makes him annoyed so he sleeps outside the room. There are two reasons why I think this annoyed Shinji so much, and it wasn’t because he was just trying to watch the film! The first is obviously jealousy, he lacks social skills to approach people in general, never mind somebody he wants to go out with. He must have felt to sad seeing two people right in front of him something he believes he cannot possible attain. That’s the first interpretation but the second which is most likely wrong says that he also feels angry because the two might make him think of his mum and dad before they had him. This could bring up sad memories of his dead mother (revealed later in the episode) and his dad who doesn’t care about him.

Shinji runs outside later to see the landscape rumble around him and hear emergency sirens. This must be caused by the stress of piloting the Eva and he runs to try and escape it and sits in the countryside on the edge of a cliff recapping flash backs of what happened before he left. 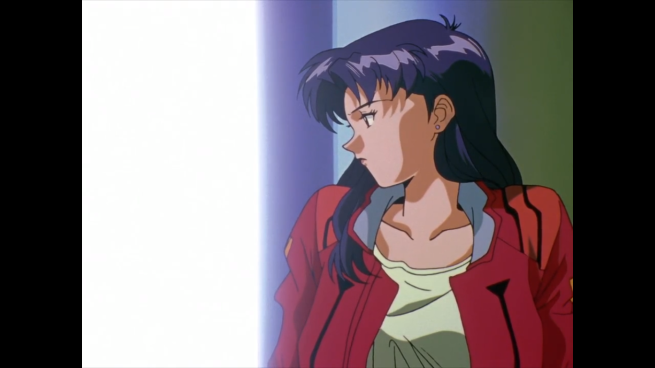 Misato scolded him despite his victory and I can relate to this moment very much. Shinji’s being scolded for something he already knows and understands is wrong so he just ignores her and glazes over it. Once Misato picks him up on this Shinji doesn’t seem to care because he won anyway. I can empathise with both sides but either way Misato explodes in anger against him and Shinji feels bad because he thinks he should be getting praise instead, ultimately leading to his decision to leave. 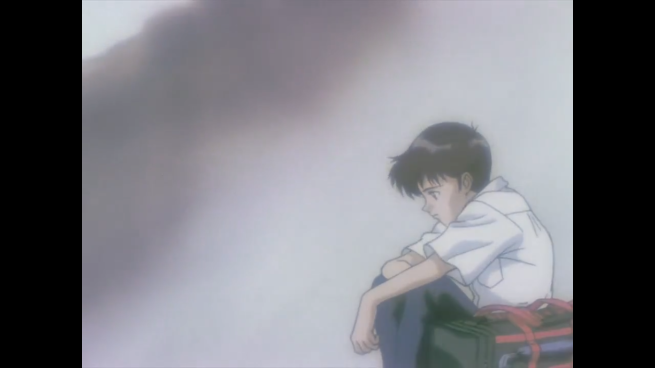 After the ad break Shinji meets his old nerdy friend in the field and he goes camping with him. Shinji bonds with him when he realises that he doesn’t have parents around either. I might be reading in to this too much but I think Shinji sees the nerdy guy as popular and normal with very little problems based on his initial attitude. When Shinji realises that this guy behaves fairly normally despite them both suffering the same lost I think it gives him hope for the future that things will get better.

When Shinji is found Misato has another interview and it’s the talk that makes Shinji quit from becoming a pilot. She realises that Shinji feels an obligation to the people around him instead of actually wanting to fight for his own reasons. This causes Misato to make him leave as he’s fighting for the wrong reasons. I have to question how sensible this decision was after Shinji saved the world twice in three weeks but if she believes Rei with her injuries and broken arm can do it instead then ok! 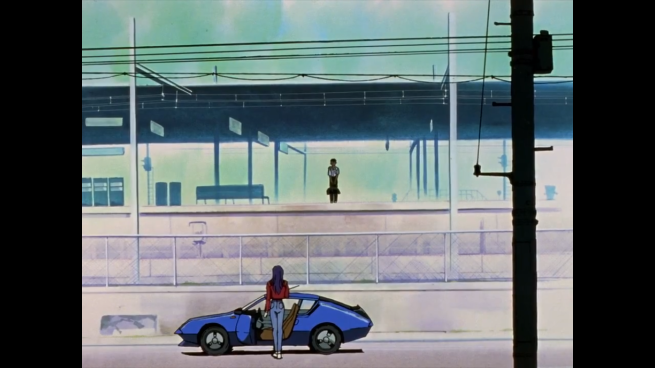 Once Shinji says good bye to his friends Mitsato has an epiphany about Shinji called the Hedgehogs dilemma. It’s about the challenges of human intimacy. It basically refers to a group of hedgehogs who want to warm up next to each other but can’t because their spikes will injure the other. Misato applies this to Shinji to realise that he wants to do his duty but has psychological barriers that prevents it. Once she realises this she travels to meet Shinji at the train station.

At the same time Shinji gets his own epiphany yet it’s a lot simpler because he can’t understand humans that well. He hears misato’s words “Hang in there” and decides to stay because that statement shows that someone believes in him. It might make him think that Misato’s anger was just worry for his safety as well.

The two have a fated reunion at the train station where they welcome each other back home. It’s a very touching moment to end the episode on.

So basically this episode wasn’t pointless since we learned more about our characters and they learn more about each other. Though I agree the plot might have been useless but the story really meant something.

Also I spilled water (not very much at all) on the page of my last series of notes. So I thought that I should use a different notebook, if only I got one that seemed pretty water proof for christmas… Oh wait: 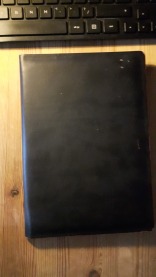 I kind of ruined it by writing my notes though…

Because chrome crashed while writing this there may be some errors that happened in the post because I didn’t save so sorry if that happened.