We open to a shot explaining that Misato really isn’t in a good place and is still mourning the death of Kaji and putting on a brave face to everyone else she knows. The only other real insight to Misato’s character is when she thinks she’s lonely when she can’t comfort Kaji.

Meanwhile we learn that Asuka hasn’t been at home and is just playing video games all day obsessively at the president’s house. The president tries to comfort her by saying she did her best and that’s ok but Asuka doesn’t think that it’s enough, and probably has depression by now. Every time we’ve seen her she’s completely miserable and the fact that she no longer cares about anything is common for people with depression as far as I’m aware.

This is shown later when Asuka doesn’t care about the fact that she’s going to pilot. She cares so little that the Eva won’t even be controlled by her and she’s sent back.

But I think Rei is the main focus of this episode as her mind is taken over much like Shinji and Asuka from the previous episodes. Once she continues to be taken over Shinji comes to save her but it doesn’t really go that smoothly. Shinji gets connected to Rei and the angel who was originally trying to become part of Rei tries to fuse the two together. But Rei just self-destructs herself so that they can’t be together.

Some time passes here but it’s with the Misato scene I described earlier. So we’ll just skip to when Rei is let out of hospital because she’s somehow alive after being blown up! How? If the Eva is ruined then why isn’t Rei, well this is answered later. But Rei doesn’t remember what happened and acts strangely, breaking her glasses. It’s strange that she cries but doesn’t understand why and I can’t really explain it until I’ve gotten to a later part of the review.

Ritsuko needs to go through an extremely embarrassing and humiliating interrogation scene which is harsh. We only see before and after but once it’s over she is clearly not in the right frame of mind and potentially damaged by the experience. Perhaps it’s this strange state of mind which explains her irrational actions later.

Misato goes through all of Kaji’s information and learns a terrifying thing about what is going on behind the scenes. Using a gun as a threat Misato makes Ritsuko take her and Shinji to the place where the Adam is. It’s interesting that Rei’s birth room looks the same as her own home, this basically means she’s been used to her own environment for her entire life and could explain why she has stayed basically the same throughout her life. The next thing we’re shown is the failed Eva’s and it makes you realise how difficult they must have been to make.

The final and most terrifying thing is the secret to Gendo’s plans and it paints him as a terrible, horrible person. Gendo is keeping clones of Rei trapped inside orange goo where Rei is shown to be just floating around. This almost confirms that the Rei Shinji met in the hospital is one of these clones and makes me think that the Rei from the whole show may be a clone.

Something I noticed was that all of the Rei clones had expressive facial expressions which Rei doesn’t normally have. This has made me think that the clones may each have an aspect of who Rei was inside of them which is stripped away to create the Rei we know, anything else taken would reduce her humanity. That’s just my theory and either way this is a tragic moment in the series. Ritsuko breaks down in shame and the episode ends. 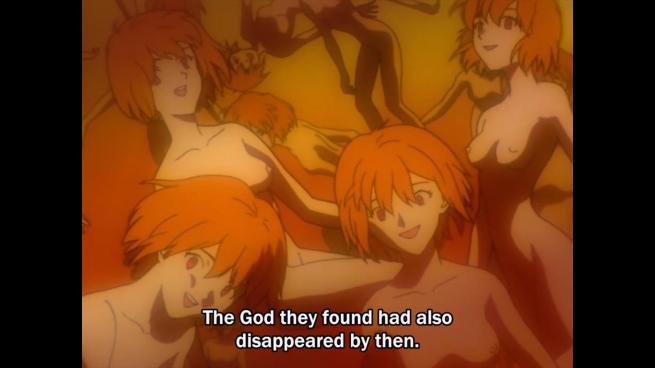