I love the Berserk manga a lot and I thought it would be really interesting to dissect everything in the chapter. In the past I did a thing like this for chapter 1 and 2 but would like to continue it for the chapters leading up to the flashback.

I just think that there is so much good at the start of the Berserk manga that it all gets swept under the rug because of how great the golden age arc is. It’s just so fascinating to me that I want to talk about it,  and since I’m secretly planning to do another thing with Berserk later I would like to talk about all the stuff cut out from the anime now because it’s still great!

I also really want to explain why I have my profile picture the way I do so it will be a great thing that I will enjoy!

I had a lot of thoughts about this chapter on my first watch but I feel like there is some value of returning to it with a perspective of knowing everything that happens and knowing what the author is planning, Here are my initial thoughts if you’re interested!

Berserk opens immediately with a scene that would put most people off reading straight away. It’s a really ballsy decision since it’s a terrible move for popularity which shows me it’s a passion project.

The horrors of the world of Berserk are shown perfectly when our main character is ambushed while he is most vulnerable. He is having sex and then the girl morphs into a demon who tries to eat him. It’s disgusting and an immediate reflection of the world. It’s like a shield for people who can’t handle this kind of thing as well, telling them to get out now if that will easily disturb you. The panels do a good job of making it highly unsexual which is probably how he got away with it.

How should someone react in this situation? You would imagine the person would act scared and die. But not Guts. He is able to remain calm under the pressure and his reaction is interesting. The monster things he’s trapped but he thinks it’s the other way around. The demon has exposed herself and now he has her in his grasp despite her being three times his size. He takes pleasure in destroying her, burns the corpse on the fire and walks away calmly as if nothing happened.

This is a such a great character establishment for Guts because to him this is normal. It gives us a perspective for the way guts views the world and just how strong he had to become because of it. After the burning of the corpse I never once got the idea that this was new to Guts. He’s an experienced swordsman whose been through a lot.

At that same time I find it clear that Guts is having a lot of emotional trauma in the background because of things like this. He has a shied which projects confidence and revenge with a man on the inside who just wants to cry at the situation because he hates it all.

Then the contrast between the city and outskirts is huge, like a completely different place. Not a lot of people can relate to his situation. As well as this they have knights, beggars and children being carted away as prisoners. This city has it’s own problems and the whole world is screwed over. We don’t understand why yet but it adds to this immensely dark atmosphere which is what makes Berserk so entertaining.

Guts enters a tavern and finds the men of koka castle attacking a fairy. Nobody else there is happy with it but there was nothing they could do. Then guts quietly and unapologetically murders them all as if it’s normal. This just reinforces that idea from the opening scene in your mind, except this time there is no noticeable difference in his attitude towards murdering humans and demons. Guts could not care less about human life. It’s revealed that he has a strong purpose so huge that it would turn him this way.

The fact that he is so jaded to human life in pursuit of his goals also does a great job in setting up the future villains and the threat that he’s fighting. It’s like, if this is what the good guy is like, I’d hate to see the bad guy!

It is true that Gut’s characterization in the opening chapters is different from the version of him after the eclipse where we catch up to the present. But I feel like the character presented here is more interesting and still has a great amount going for him. 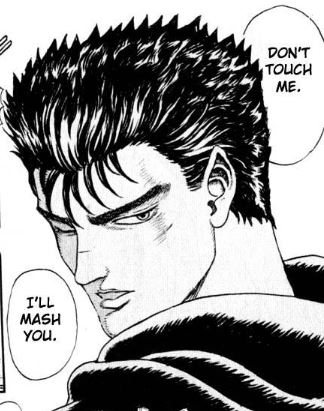 Like how when Puck returns to meet him he is extremely defensive and says not to touch him. He is really untrusting and violent to strangers! You’ve just got to feel sad for a guy who has had the human experiences to make him feel this way.

Anyway Guts is captured and tortured and learns about the true twisted nature of the city he has entered. The city is in constant threat by a demon and the people are scared of it, they have to sacrifice their children to appease it. The city is under heavy regulations and anything bad, such as the death of a lot of his men all at once would cause the town to be destroyed. So, guts caused the destruction of the town just by killing some men. 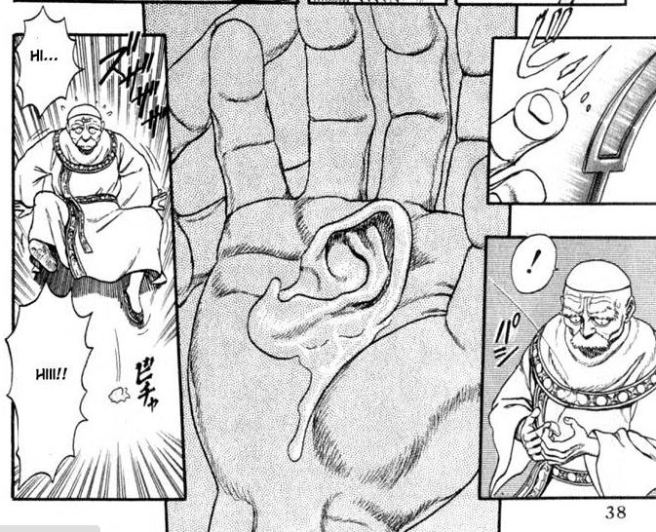 The Baron of Koka castle has had enough though. He shows his threat by throwing a human ear that he was eating at the mayor! It’s such a cool thing to happen and is a sick way of pointing out his evil. This is the guy who Guts wanted to get, and now we’re just wondering why.

Something that really impressed me that I failed to notice on my first read through was the appearance of Caska’s child.It’s right in chapter 1 showing Miura knew what he wanted! This keeps haunting him and it’s not really explained but it’s creepy.

Puck comes to Guts in prison and we hear his philosophy. I thought this was really twisted and interesting, which is true, but I think it would be fun to talk about it knowing what happens.

Well this obviously shows Guts’ attitude towards the band of the hawk but it’s also interesting in relation to Griffith and his dream. Guts got caught up in Griffith’s fight and left it as soon as he learned what Griffith really thought of him. It’s strange because he seems to be very much distancing himself from the old friends who died in the eclipse. Maybe this is just how he deals with it.

Then guts’ brand starts to bleed to show the coming of a demon. We’re not told this until much later but I think it’s communicated clearly enough here.

The attacker is the guy who threw the ear dressed as a snake, until he converts into a snake monster and Guts kills him. But this demon is already dead in his mind, Guts is on to bigger things and is only here to find the God Hand. It’s a really interesting way to set up the God hand. Guts doesn’t even care about this minor victory in his mind, even though he just set a town free from a tyrannical ruler. It’s what sets him up for the rest of the opening volumes as a fascinating and jaded individual.

Thank you for reading the Berserk chapter 1 discussion, what did you think of the chapter? Also I hope you stick around to explore the rest of the opening chapters of Berserk to see why I like them and find out why I have my profile picture the way it is!

2 thoughts on “Berserk Is The Greatest Manga of All Time: Chapter 1”