Skip to content
HomeBerserk Is The Greatest Manga of All Time: Chapter 2

Chapter 2 “The Brand” is the 2nd part of the three story arcs before going to the golden age arc and it’s interesting that after this review we will already be 2/3 of the way through the stories.

Chapter 1 “The Black Swordsman” is a huge chapter and is 90 pages long and chapter 2 is 72 pages as well which means they are both huge chapters with conclusive stories and they’re great. The next arc is much longer though. We have a 56 pages introduction to the guardians of desire arc and then we go into volume two which is only 2 chapters long! They are huge chapters and I love that it stays that way for a long time before splitting into monthly.

It must have been such a risk and time investment to make that decision at the early stages that I’m just impressed. The world is great in these early stages and having much longer stories really adds something to the world early on as the action does not have to be split into the normal chapter structure. It’s instead much longer and has that similar structure over the same amount of time. So let’s talk about the chapter!

I love the visuals of the world of Berserk. It’s so beautiful to look at yet so evil. Those few initial panels set up the world to be so interesting. Puck has lost Guts and when he finds him he’s already injured again from fighting. You start to wonder how people can survive in this world with so many terrors going around. 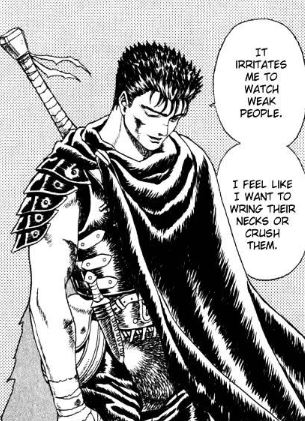 Guts has a lot of disdain for Puck early on and it’s explained that he hates to see weakness. This isn’t exactly true for the Guts we know however it tells us things about him. Guts values strength greatly, he’s like a strength elitist. He hates seeing weakness because he dislikes the idea of people being defenseless in contrast to him. 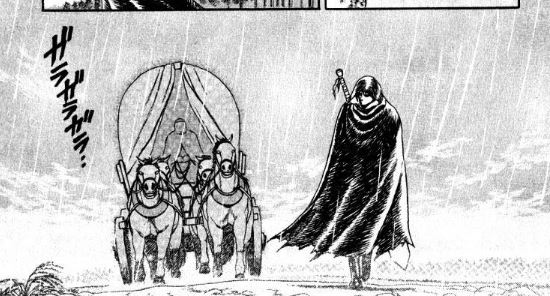 Then the rain falls and Guts meets a priest on the road who takes pity on him and offers to help him out. The reaction he has is also strange because he isn’t phased by demons at all. We aren’t sure at this point if his status as a man of God really does protect him or if the demons are the Gods.

Then we see that Guts doesn’t care. He tried to persuade the man however he doesn’t care strongly enough to leave him from risk.His attitude is that he warned him and will take his offer even though he has no idea what’s coming. It’s presented in this dynamic that Guts knows something that the old man doesn’t, and it’s cool.

We aren’t actually told where these guys are going just that the priest lost his brother to the sword five years ago. This makes sense because this would have been during the war recently, of course we don’t know that yet though. It just gives us the idea that there is a lot of political tension in this world and people are not safe.

It’s hard to get a sense of scale and location while reading the manga. It shows the scale of the world but a sense of location would be much more ideal. However it gives us the great impression that Guts is a wondering adventurer who has no idea what’s going on or where his journey is taking him. I don’t even know how much a map would have helped. It would have been cool but it’s overall non-essential.

He is given a hot drink from the girl and he accepts gladly. When it looks like Guts is going to fall asleep she puts a blanket on him and is either scared or just blushing. He is thankful though. If she is blushing out of embarrassment it’s fair enough but I think it shows how scary Guts is to new people or just that he looks good because he’s strong! I wouldn’t know though, please tell me!

After this we transition to a really creepy dream sequence of Guts walking around hopelessly trapped in a maze. He is naked and vulnerable. Then a huge version of Caska’s child appears to wake him up. On the first read I thought that this was just Guts’ crazy dream however he is under the influence of a demon that’s sitting on his face. It means that this isn’t his dream, he’s just being haunted and it sucks.

Does anyone else find it strange that nobody else noticed this demon while Guts was right in the back of the carriage! These guys can just come out of nowhere and nobody could notice!

Then Guts gets the consequences for his actions. The girl who looked after him is stabbed from behind immediately after she gets out and a mass of skeletons attack! This is something that just happens because Guts has the brand.

The brand is built up so well because we see it’s effects before we learn what it is. The brand attracts demons which is why Guts seems to be living a completely different existence to everyone else.

We have a great fight scene with these skeletons before the true horror of the manga comes out when we see that the dead girl has revived into a skeleton and murdered her father. It’s a horrible moment and Guts is absolutely to blame. For a brief moment we can see the terror and sadness on Guts’ eyes. Even though he tries to hide it, in this instance he feels bad. He’s so shocked that he lets himself get stabbed. He is a hugely strong man and not a lot can stop him except for something like this.

However he is able to shake off the injury because it’s not deep. he’s sick but wins anyway. Puck: “It’s not your fault” Guts:” ha ha ha ha ha!”Oh dear, this is a messed up person. Guts justifies this by saying he can’t live in fear of squishing Ants underneath him. He thinks people should be strong enough to save themselves. It’s hard to know how serious he’s being here.

Then he is hopelessly attacked with demons. It’s a huge insight into his mind and explains his mental state really well. He fire a cannon and leaves, bringing us into the next arc. We can assume that he was going to the place he appears at next where everything is flawed even worse. It’s a great arc to continue into.

While both of these initial arcs may seem pointless because not a lot of events happen they still do a lot for the manga. Like how chapter one sets up the world in a great way and gives us the terrible nature of the world. Or like how chapter two explains a small aspect of religion and the harsh consequences of the brand. It’s slow but each chapter has a definite purpose which is great.

2 thoughts on “Berserk Is The Greatest Manga of All Time: Chapter 2”