Yeah we’re continuing with this series, where we go through all of the berserk chapters until the golden age arc starts, because I really like that early stuff as well!

It’s funny to me to have the start of a huge arc at the very end of volume one, where chapter 3 takes place. The first two chapters had all been standalone stories so it must just be that they were so successful that the publishers thought it was safe enough to start a massive arc. I’m really happy about that.

It’s so strange to me that so many of the early Berserk chapters are really long. Volume 1 is three chapters and volume two has two chapters! You would have thought that it would be a risk to release huge chapters like these and I want to find out the conditions which made it possible to not have a consistent release schedule which clearly didn’t happen. The early volumes of Berserk are also slightly longer than normal volumes, you can really feel the early passion here and it’s great!

Anyone on to the actual chapter itself! The Guardians of Desire, Chapter 1

We immediately open with the beheading of a girl who looks very innocent. She is being convicted of heresy for immediate execution. This shows us the major problem with the town, it’s tyrannical ruler with an extreme religious agenda.

In chapter 2 Guts met a priest, I can’t help but think that priest was heading to this town because of this religious backdrop.

At the same time the beheading shows us that Guts will not be welcome here as he’s not religious. The two different ways non-believers are treated in Berserk is extreme. On the one had the priest Guts meets is fine with it but this town convicts normal believers on a minor suspicion that they might be heretics!

The villain of the arc is then shown, he thinks he’s doing well but his evil smile just doesn’t suggest the same thing. Guts picks up the head, spits at a guard and throws the decapitated head at the ruler of the town. The head now has the brand on it, which I don’t think is consistent with the rules of the world but oh well. Guts at least has the brand, and it’s bleeding. We all know what that means and the count knows it too. He’s realized that Guts knows he’s a demon dude! 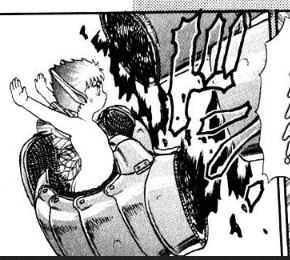 Most of the rest of this chapter is just action, which is great but theirs not much to comment on. Guts just gets chased around the city and has to fight people. Puck appears and we get the coolest thing where Puck saves gut’s life and Gut saves his life immediately afterwards. A guard grabs Puck and then Guts chops his hands off so he’s free, it’s pretty cool!

Then there is a huge soldier which Guts gets rid of however more guards just keep coming. A man in bandages from a low window of a building shouts to him and Guts follows.

The man who rescues Guts wants the count dead, how convenient Guts wants him dead as well! This man who Guts looks at had been completely attacked, tortured and ruined by him. Guts goes along with him and sees the behelit and the manga ends!

The behelit here doesn’t behave in the same way as later, because a lot changes from this early section however it’s still pretty cool to see it here! That’s the end of volume 1, see you for volume 2!