Since this is a review of the second chapter of the guardians of desire arc it’s recommended that you read the previous one so that you can understand this post.

We open the chapter directly after the previous, with Vargas, an ex-physician who got brutally mutilated, offering him the behelit in exchange for killing the count. Vargas was held captive by the count and saw his family murdered in front of him, only escaping by faking his death. In his years outside of torture he has been examining and trying to work out what the behelit is, he discovered nothing.

The way these early concepts are established are often contradicted later in the series, for example I don’t remember Griffith’s behelit ever being able to blink. In the same way the behelit cannot create a portal at will to the god hand, it only works in certain circumstances.

The whole point of the early chapters is to lead Guts to the god hand, it would make sense that we follow Guts along through these different adventures since discovering the god hand would lead into the flash back which is the golden age arc.

We then go into another inconsistency with the world. Every demon has gone through the same process to achieve their powers, this will be brought up in a later chapter review so I won’t mention it here. Just know that most demons don’t have the ability to transfer their powers themselves and the god hand has to do that. You can’t just give some one your “body part” to convert them to a demon, in my physical version instead of the translated version online it’s written as “Daemon” which might make more sense, it could just be another creator within the count that he is able to transfer. This thing never comes up again though so I’m considering it an inconsistency.

The hints that the count was a demon before this was the fact that guts’ brand bled, he had a sudden transformation when he switched from nice to human and this is the obvious moment where he’s not even afraid of showing his demonic sides to his guards. This would be a reason why people might want to get rid of him so he clearly has a lot of power to blatantly do that in front of people.

In my mind giving the man his Daemon was essentially murder, it overtook him and then consumed him changing him so he couldn’t possibly be the same person.

Interestingly enough Guts has a strange attitude to Vargas that you wouldn’t assume, he really hates that guy! In early Berserk Guts really hates to see weakness, and the fact that Vargas cannot help himself and relies on the strong really rubs him the wrong way. This is a good way to show Guts to be strong without him actually fighting, which is what happens next.

The man who the count transforms arrives to kill Guts and he loses, the Guts says he’ll only kill the count in exchange for the behelit which Vargas agrees too. It’s funny how he says he’d have taken it by force otherwise. This shows how cruel and unsympathetic Guts is, and how much he wants to achieve his goal.

The most powerful part of the chapter to me is how Guts relates himself to Vargas, it’s so effective. Everything that happens to Vargas Guts sees in himself. He was mutilated as well and that’s why he can’t stand the weakness. This leads to him completely ignoring Vargas when he’s being beheaded for heresy. 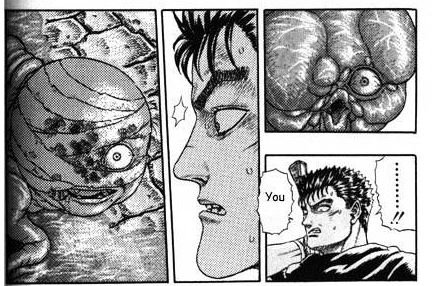 This is when Caska’s child shows up for the second time with the head of Vargas. Guts is clearly traumatized. This continues to later in the chapter when ghosts attack him and he is clearly panicked. It’s not an easy life for Guts, and it’s very easy to see how he became the way he is due to these circumstances presented to us.