(This post features spoilers for both Kaiji and Liar game, but if you haven’t seen any of these by now what are you doing? I’ve been writing about this stuff for ages!)

Both Kaiji and Liar game are very similar shows in the fact that they feature gambling however the nature of the characters and scenarios present completely different ideas of friendship and betrayal.

In Kaiji our protagonist is a fairly weak gambler and is easy to be manipulated. He often wins through last minute strategy or luck which helps him out. There is a common thread of all of this about teamwork and allies.

Kaiji cannot win without help. All of his victories come from working with a team, and that’s when the problems start for him. He always gets betrayed.

You might understand how he might get betrayed by his allies in rock paper scissors since he only knew them for an afternoon, and for the next arc in season one nobody has the opportunity to betray him since it’s the players against Teiai.

Then he forms a super alliance with (basically) slaves when he himself is (basically) a slave and even this turns sour for him, though not until the second arc of season two and eventually the manga.

Essentially the arc can’t even end without Kaiji getting betrayed. In the act of winning his friend signs him up for a loan which has interest rates of 10% every 10 minutes or something like that and he loses over half of the money won from beating the bog.

Then in the next arc he is betrayed by people who he considers life long friends. It’s pretty bad.

Right now he hasn’t been betrayed since part 3 (we’re currently on part 6) but that’s mainly because of the massively different structure of the majority of Kaiji taking place in the same week or two of time.

The point is that Kaiji gets betrayed a lot while the main characters in liar game don’t, well not by people they consider friends. And I find it interesting that in these extremely similar stories there is such a huge difference in this regard. And I’m just wondering why make this very obvious choice?

Why The Liar Game Is Different

The nature that people joined the liar game is completely different to that of Kaiji’s gambling games. In liar game the people who join are completely normal at first, and then slowly the weaker and less manipulative players are removed. This means a large portion of the game is just against normal people with a few people who could be considered masterminds. I’d say that overall there are about 4 people who could be considered to play the game well while the others are followers of these people. This leads strong factions to form and people are less likely to betray these people.

Alternatively the people of Kaiji join from much worse backgrounds of massive debt. The people in liar game are trying to avoid going into debt in the first place while Kaiji’s people are trying to get out of it. This promotes selfishness as instead of profiting they are just trying to return money they once had. In fact to survive and get back into positive numbers.

If any of you have seen Middle Manager Tonegawa you’d know the terrifying way that the gambling games of Kaiji were created. They were simply made to please Hyoudou who is the most evil and manipulative tyrant in anime. His biggest interests are watching people suffer, therefore the game is designed to create the conditions necessary to please him.

The liar game is in fact very different and the idea is that on the surface there is no way for them to profit. This is because they give their own money to players with the intention to get it back. If a player can’t return the money they go in debt to the liar game and if a player wins money they only need to return the money they were loaned and can profit. So overall the money that they gain is ultimately the same as long as they don’t charge interest (which they probably do but nobody knows).

There are very few times when they have tried to get money for themselves. At times their have been conditions in rules where they take money but it’s quite rare. The current arc I’m reading has the most possibility for them to win money as two people could lose at the same time since the same chair cannot be used twice in a row so two people could be out at once.

One of the main mysteries of the game is what happens to people if they lose and fall into debt and it’s so far never been told to us. I’ve not actually got through the amazing musical chair arc yet though so who knows?

All we know for sure is that there are a lot of revival rounds, where people have the opportunity to return to the game if they want to. This is mainly used for people who are in debt as they need to continue and win to get out of it. I’m just wondering if theirs even a place where you will stop being revived since theirs such a large amount of them!

Because of the way this works people are able to behave less evilly and nobody has a reason for betrayal except for profit (well at first, people might get into greater debt later) so people’s motives are very different.

In fact the possibility for everyone to win is in the liar game while not in Kaiji, this gives the people in liar game a much easier time to have team work. In fact it seems like that’s the point of the liar game that they are trying to get across to the players. Which brings me on to…

A lot of Kaiji’s players are cunning gamblers for good reasons. They practice gambling a lot and therefore are very manipulative and have a lot of gambler like tendencies as described earlier.

One of the main characters in Liar game is a guy called Akiyama who is an ex-con artist who drove a company to bankruptcy. He is sort of the genius of the group. Anyway his motives for killing that company were actually good because from memory they were an illegal pyramid scheme who drove his mother to suicide.

But that company never actually became bankrupt, it instead became LGT or Liar game tournament. So Akiyama is both in the game to save everyone and completely ruin the company who is in charge of the game. There are two motivations.

She has an amazing conscious and empathy and is the complete opposite of selfish. She could have won 2.4 billion yen by now (the same amount as Kaiji has actually won at this point in the series, though in the most recent chapter he lost like a third of it) but she threw it all away just because she would rather win without anyone being in debt.

In fact her best strategy by far was the idea of losing while you have all the money meaning you can drop out of the game with a profit.

Still the people in Kaiji have a great motivation to betray whereas it’s less so with Liar game. In fact it’s very obvious why it happens to Kaiji for the following reasons.

Kaiji gets betrayed ultimately because he’s too trusting and gives players roles that they really shouldn’t have. If I were to give an example it would be when he pointlessly put himself out of stars when he clearly wasn’t the right person to do it.

Kaiji was a clear leader in the rock paper scissors game however he still trusted his friends to save him. The people in Liar game wouldn’t do this because the alliance in lair game is always from the opposite power dynamic.

When Nao saves someone (everyone) they realise that she didn’t make it up and it really increases their trust and brings them permanent loyalty which is very difficult to break apart. In fact opponents have always given up trying to recruit their allies since they are so bound to each other.

Kaiji trusts while Akiyama doubts. It’s a fundamental part of the series but I’ll let Akiyama explain it for you.

“People SHOULD be doubted. Many people misunderstand this concept. Doubting people is just a part of getting to know them. What many people call ‘trust’ is really just giving up on trying to understand others, and that very act is far worse than doubting. It is actually ‘apathy.'”

Whether or not you agree with this is irrelevant to the idea that using this line of logic leads to less betrayal. The actual use of these statements of day to day life is more debatable. But in terms of playing a gambling game then this statement needs to be true for you to win.

Due to this Akiyama gets betrayed less and if it does happen he often predicts it as well. In fact if theirs someone who he can’t appear to trust he’s cut ties with them. He plans to save them later in the end but doesn’t trust him to help for example.

Kaiji well is a different story.

Motivation for an Aliance

Becoming friends and working together is fine when working together benefits the both of you. It’s only when the characters are in a non-beneficial situation that this relationship can be tested.

Kaiji is the one to test this relationship and when this is tested it fails.

For example the two form an alliance of 6 people in the musical chairs game and it was in a position to fall apart easily. The two know that betrayal is an absolute option so they put measures in place to make it so they want to stay in the alliance even when it’s not beneficial to them.

For example they each exchanged tokens with their name on it so they had a fairly even amount. The winner of the game gets all of their tokens to be worth 100 million yen, meaning that only the winning tokens are actually worth anything. By exchanging them between the entire group it gives everyone motivation to work together as they all benefit of one of their members wins the entire game.

I hope you enjoyed my comparison of the themes of trust, betrayal, friendship and teamwork in two similar yet so very different series’. If you made it through this far and haven’t actually seen either Kaiji or Liar game then definitely get on it, I’ve cut out so many things from this that you are sure to find something you like from both series’ if you enjoy these ideas! 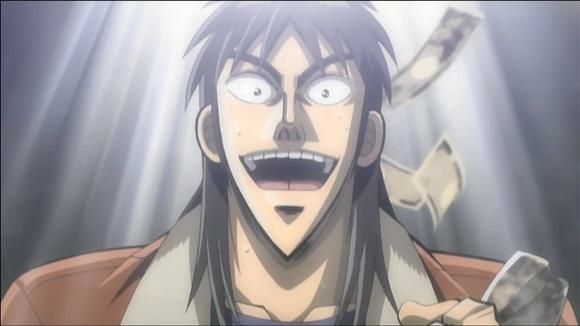 18 thoughts on “Friendship and Betrayal in Kaiji and Liar Game”