Monty Python’s Life of Brian is such a funny and hilarious film that follows Brian, a person who many people confuse with the messiah in the same time period of Jesus.

The moment that the people thought he was a messiah was so funny that it caused me to laugh so loudly that everyone in my house came in to my room to ask me what I was laughing about. One of those people was a Christian who complained about it being offensive to Christians, so I thought I may as well address it now.

I don’t think this film is offensive in any way at all. This is purely comedic and about the struggle of Brian and Jesus is completely taken out of the picture. Nobody comments at all on Jesus, the only thing maybe offensive is people complaining that they can’t hear Jesus when he’s complaining at the start. While there are references to Jesus none actually reflect disrespect towards him, not to say that they respect him either, he remains neutral so believers and non-believers can still find comedy in the film. In actuality Jesus cures a leper which should create the alternative response.

Brian doesn’t even get confused to be the messiah until an hour into the film (if you don’t count when the wise men confused him as a child) and even when he does the film never treats him as Jesus. He goes through Crucifixion (because people think he’s a criminal and not the messiah) and it’s nothing at all like Jesus, it’s just a sad end to the story as a lot of people were crucified at that time so let’s not pretend like the cross was historically only for Jesus, tonnes of people were crucified. As well as that it would have been insulting if the same person to be saved from Crucifixion was the same as who was saved when Jesus died, instead they switched the person to be saved with Brian meaning he is not treated as Christ at all!

I have heard that some Christians tried to ban this film, and I quite honestly think that the idea of banning this is worse than anything the film possibly could have said against Christianity, even if it was extremely harsh and disrespectful to Jesus. That form of expression has a right to exist.

Anyway now that I’ve talked about the controversial thing about this film I can actually begin giving my opinions of it!

This is great, so incredibly funny and just really nice to watch. It feels a little like a series of skits tied together by small plot events which really add up to a very simple but great story.

I really like the character of Brian in this story, he is a really good character in my opinion. He starts off and immediately comes across as a little self-conscious, meek, unintelligent and obedient. When I say “little” I really do mean little, he is fairly normal but has these as stand out traits which make him come across as a guy whose just got a little less self-esteem than others. But these traits show in really effective and subtle ways.

His mum is very controlling and gives him a lot of orders, which he obeys, still being controlled. A fight nearly breaks out when people start calling others big nosed, mostly everyone fight against that however Brian does nothing, instead later going “do I really have a big nose?”. He is then persuaded against his will to give money to an ex-leper (who is perfectly healthy by the way) and persuaded to haggle when he was prepared to pay the original price upfront. These moments keep on adding up making you gain a strong affection for Brian, it’s his personality that allows people to confuse him for the messiah and have all these things happen to him. 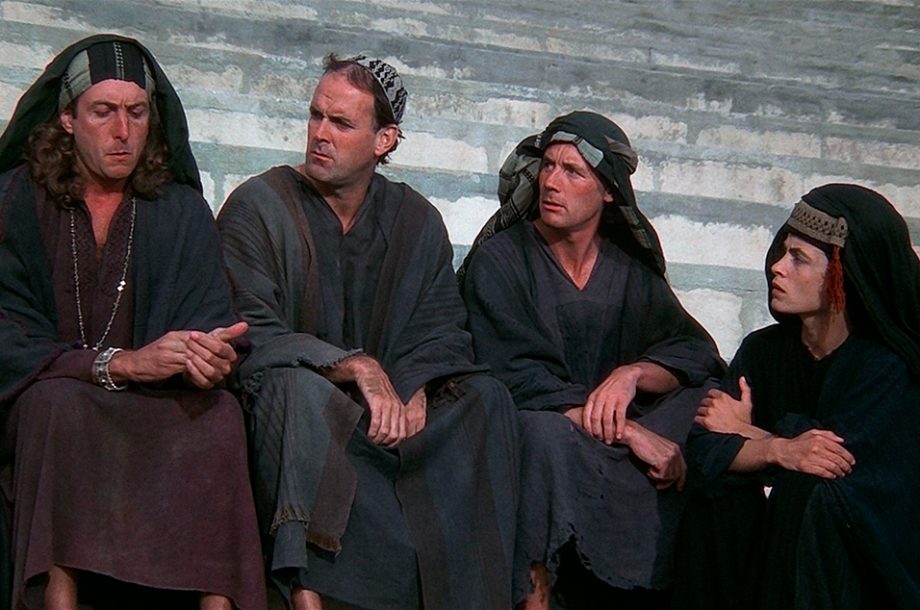 His trip through his exploits for the people’s front of Judea leads to great moments which are so funny. I particularly liked an entire crowd shouting in unison “yes we are all individuals” which went against the way they said the statement. Also there was the thing where Brian said “I’m not the messiah” and someone saying “Isn’t that what the true messiah would say?” and Brian saying “Fine I am the messiah”, “HE IS THE MESSIAH!” and things like that. Pilot was in the film with an accent where he pronounced R’s as W’s e.g instead of Rossiroad WossiWoad and I found it so funny that the only reason Brian was saved from resurrection was because the people kept on suggesting names that pilot couldn’t pronounce so they could laugh at him.

But don’t just take my word for it, you can watch it here on YouTube for free right now!