Got 2 one shots for you this time!

This one shot by Junji Ito was just great. It was scary, had crazy art and was really entertaining and interesting as well as scary.

The ideas about death were what made the story so fascinating to me it was crazy.

We start fairly innocently in a doctors office where a man is telling a doctor about his condition. He has started having dreams that have lasted a month and longer. They’re not good dreams either, it’s months of constant nightmare.

It sounds awful and like a really bad condition to have. We’re even shown that. Each time the patient goes to sleep he dreams about something for a very long time and can’t remember details about what happened the previous day. All the situations are creepy and eerie and his condition only worsens over time as the dreams get longer and longer and more traumatic.

But it’s what’s done later as the doctors try and understand this condition that makes it so scary. 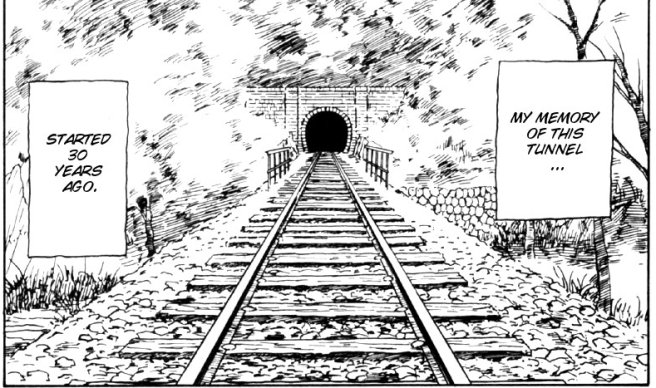 The Story of the Mysterious Tunnel

The premise of this one speaks for itself. The whole thing is about the events of this mysterious broken down tunnel and how destructive it is for the people nearby.

The tunnel isn’t just a passive landmark in the world, it calls people and despite not wanting to go or knowing better they always find themselves there, even after moving far away.

It’s very good and very creepy though a little unoriginal, you can see the same idea used for haunted houses for example just replaced with a tunnel.

What is original is what lies in the center of the tunnel and the relationship it has with the main characters. While the reveal might not be the best it’s still interesting and crazy once you actually start thinking about it.

I recommend both of these of course, especially at Halloween.