This might be a big one since this is the month where the post “I watched 24 hours of anime” was came out. Yeah. Tonnes of episode ones that I’ll never revisit.

Mirai is the new Momorou Hosoda film and I watched it in cinema’s on it’s release date! Yeah that shows just how dedicated of an anime fan I am. And the fact that I’ve not got around to watching his other films yet doesn’t matter I guess?

Anyway Mirai was a film about siblings with the main character jealous of the new born baby that his parents have. It’s not necessarily what I wanted the film to be about however I enjoyed it all the same.

It kept me interested and it was fun seeing how he learned how to behave from the people he met and the adventures he went on. Mirai appeared a disappointingly small amount in the film and it was actually more focused on the kid which was a shame to me. A full review can be found here!

This was such a good film for how sad it was. It was about the atomic bomb that dropped to end world war two and all it’s tragedy was shown in full horror and detail. As it went on the film just got sadder and sadder, as the characters found the tiniest things to celebrate over, and the things they get happier for existing is so so sad to see. You can find my full review here!

This is a show I saw one episode of during the 24 hour anime challenge and after I was motivated to finish this because I found it so funny because it’s premise is so good.

Essentially there exists a Japanese Indie music band called Detroit Metal City and they play heavy metal and have a really loyal fan base as well as a terrifying reputation of committing tonnes of crimes.

But the lead singer is nothing like this, instead he is a very nerdy and shy person who just wants to make his own pop music – but his producer and success have different opinions.

He has to pretend to everyone that he’s the villain and evil demon guitarist Krauser and play the character well. The situations this gets him in is actually so funny.

The one I watched was the one that gets meemed all the time. It was also in English. I got the impression that you were supposed to watch this in a so bad it’s good kind of way. The length of the films were pretty short and there wasn’t a lot of time to actually have a good story to tell.

Also the dialog was pretty funny in English. The thing is that it got old really really fast for me which was a shame. I don’t really find bad dubbing funny – it was good at first but two hours? No it didn’t work for me.

The style of dubbing I like the most is the way ghost stories does it because the dub adds content to the show instead of just being terribly bad. I can always laugh at a ghost stories joke – not an awful line delivery when I’m listening to them all the time.

I am sure to have a post about this in the future so I will save my full thoughts until after I complete it, but there is still some things to say. There are two kinds of people who should watch this.

The first is people who actually have an interest in being a boss and that style of comedy. An interest in managing people and how being a boss works. If you go into this expecting a comedy about a struggling boss then you can’t go wrong.

The second type of people is diehard Kaiji fans who just want to see their favourite characters burn.

As a die hard Kaiji fan I have to say that this is seriously disappointing to me. The show has 24 seasons! They could have adapted part 3 and part 4 of the manga! I actually know how to play mahjong so I would enjoy that kind of thing! Instead we got this.

In Kaiji Tonegawa and the black suits were demonised, they were the most scum of the earth people imaginable. The black suits for their actions and Tonegawa for ordering them.

This show does not do that. It does the complete reverse and humanises them instead. This is not the Tonegawa that I know, this is not the black shirts that I know. Making these guys completely normal people instead of the scumbag loan-sharks they are makes all the events that happen in Kaiji seem far less significant. Anyway more on this in the inevitable post that comes out later. I’ve got to remind myself that this is a “what I watched” and not a review – I’ve not even finished the show yet!

Now we’re moving on to manga 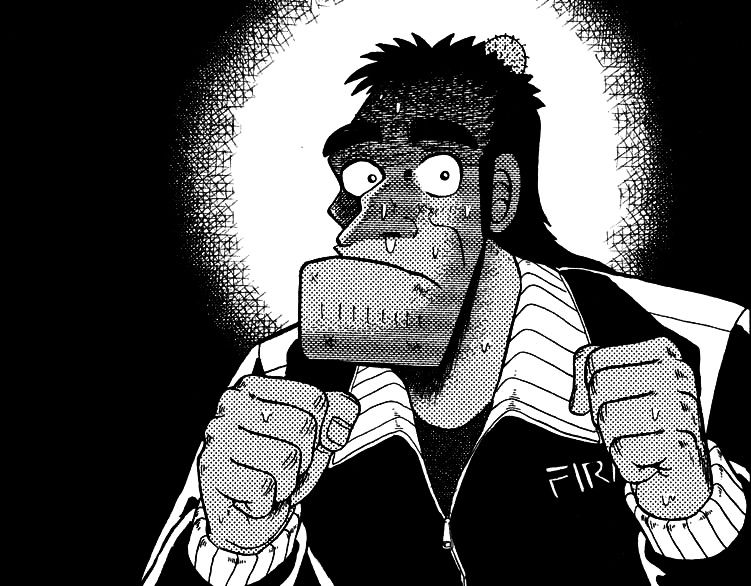 This was the only manga that I was able to read even a little of this month and it was pretty good. It’s about a construction worker who is 44 and feels like his life is going nowhere and nobody cares about him. Due to this it’s really sad at the start and you really begin to empathize with the character.

He is extremely awkward socially and doesn’t know how to behave but eventually the sadness ends and people start liking him for how different he is. This is only the start of the manga though and he goes on to do some pretty crazy things to say the least.

This was written by the creator of Kaiji so I definitely recommend it.

Thanks for reading! The best anime of the month was Barefoot Gen and the best manga was Strongest Man Kurosawa

Anime
January – Neon Genesis Evangeleon
February – A Silent Voice
March – Hajime No Ippo: New Challenger
April – Welcome to the NHK
May – Goshu The Cellist
June – Castle In The Sky
July – The Secret World of Arrietty
August – The Boy and The Beast
September – When Marnie Was There
October – Giovanni’s Island
November – Barefoot Gen