If you haven’t seen Detroit Metal City you’re in for a treat. It’s a hilarious comedy about a normal dude who has to pretend to be a demon into crazy heavy metal music even though it goes against his nature. But when he does change into his performer he becomes Krauser who is crazy.

Also the comedy of the show is pretty specific.

So if there was someone claiming to be Krauser but there was no proof what would you do? Well naturally the only way you could possibly tell that Krauser was indeed Krauser was by the fact that he can say rape ten times in one second right?

One of the stunts that Krauser performs is indirectly telling his fans that he will appear at the Tokyo tower. Because he doesn’t know what to do he just turns to the Tokyo Tower and starts raping it. Then it starts raining and people say “It’s enjoying it!”

After this Krauser runs away and they’re like “He fucked the Tokyo Tower and tossed it aside” which I thought was pretty funny.

Now imagine a great romance anime movie, now imagine Krauser in the background of the entire thing just meddling around with everything. This is an actual film that Krauser makes and it’s hilarious.

I love how the director completely throws everything aside just so that Krauser can look cool and mess stuff up.

They all inspect Krauser’s flat to make sure that he’s living in the way that they would expect him to be (awfully) and then his neighbors show up and Krauser is worried that it will affect their relationship.

However it has the opposite and now these really old guys are into DMC even though it is the last kind of music made for them. 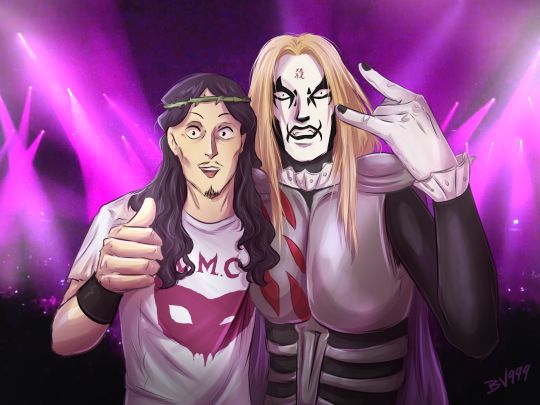 At some point Krauser beats the king of heavy metal music who is going around to every country and beating their musicians in battles of music. However since Krauser wins he gets the bad-ass guitar of the guy who uses it and starts performing it on the street.

He is a normal street performer performing very soft pop music by day, it’s just that now he’s doing it with the most out of place guitar ever created!