We open to a bright morning where Misato is completely different from how she was previously and it’s hard to believe the two people are the same and it kind of reassures my initial pre-judgement of her plan was correct since I see her acting like this. She lives a bad, messy lifestyle and Shinji makes this very clear by telling her that’s the reason why she’s single.

I think she’s single because she has a very long, important and stressful job but that might just be me. As well as that it’s not hard to see why she has a terrible home situation when dealing with the stress of her work. It’s hard to tell which Misato she prefers being. She might enjoy letting lose but she might like the idea of an important and proper military woman a lot more. At this point I’m leaning to the idea that she likes being slobby a lot more since I can relate to wanting to relax and drink at breakfast. 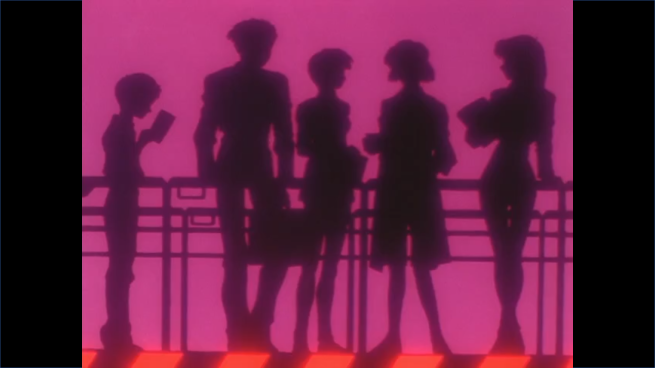 When she walks past school later Shinji remarks at how different their attitudes would be if they realised how sloppy she was. As Shinji is being taken away we get to see an outline of all the characters and it’s actually pretty cool to see how iconic their designs are. Shinji, Misato and Ritsuko’s (One of the other girls in charge) stand out clearly and I recognise the other two workers from earlier episodes even though I don’t remember their names. It’s also revealed that the Eva’s are made of biological material meaning my theory from one of the previous episode reviews was probably correct.

More information was revealed to us about the angels as well. Some of them have the ability to blow up continents! As if the stakes couldn’t get higher already! 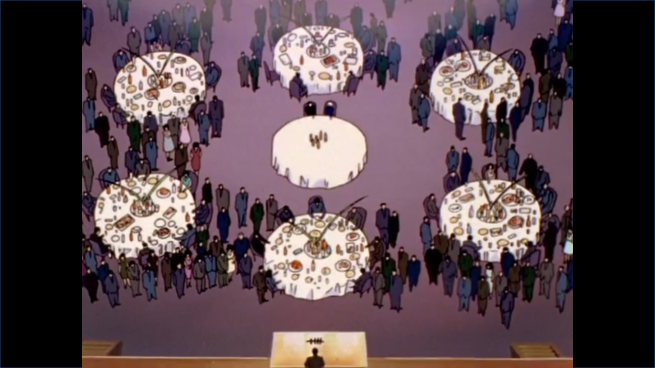 When shows tend to introduce politics into their plots it’s rare to see it done well or in a way that interests me. Theirs one exception to this rule and it’s that I’m ok with it if it’s funny. The politics in this show were pretty funny so I’m ok with it! Ritsuko gets humiliated at a rally but it’s funny how much they trivialise the power of the AT shields. For some reason they think something that needs all of the electricity in Japan to break will simply go away and won’t be a problem. That’s pretty stupid. As well as this the same people laughing at our lovable main characters immediately make a mistake more stupid than the one where Shinji nearly died immediately and I found it funny how they only act like they knew what they were talking about.

It’s also funny how they thought putting a nuclear reactor inside an Evangelion was a good idea when we’ve seen the Eva’s battles and know that nowhere on its body is safe. They probably have one resistant to explosions but still… 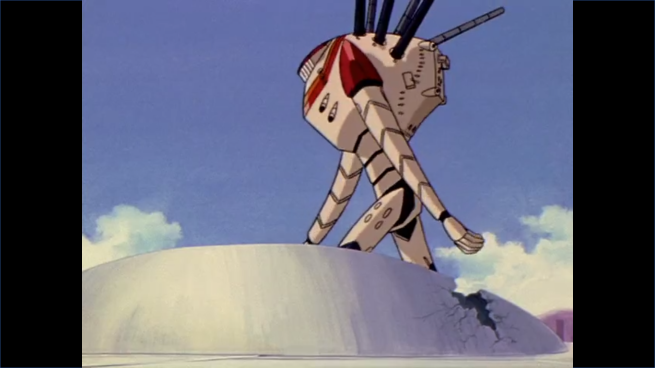 So the opposition to NERV launch the first test of their robot EVA which goes terribly badly. They tell it to walk slowly, and then they stop it, but it doesn’t stop and keeps going, walking through the ceiling of their military base and then continuing on seemingly indefinitely.  So it comes to the people who know slightly more what they’re talking about to save the day! Misato tries to get the password to delete all of this robots code and she asks for authority to know the password. The leader gets it and doesn’t care and the person who he passes it on too wants written permission. Oh yeah and he’s playing golf instead of doing his job, brilliant.

She gets the password anyway and goes with Shinji to try and shut it down. Basically Shinji holds the robot back while it’s walking and puts Misato inside to try and delete its code. You would have thought they’d have better testing procedures for robots capable of blowing up buildings but apparently not, the robot even overheats which is kind of bad since Misato is going inside of it. She enters the password to receive and error, she does it again and still nothing, she tries to prevent the robot from exploding by pushing really hard on a canister but at the last minute the robot deactivates. Misato’s ok but very tired and stressed. 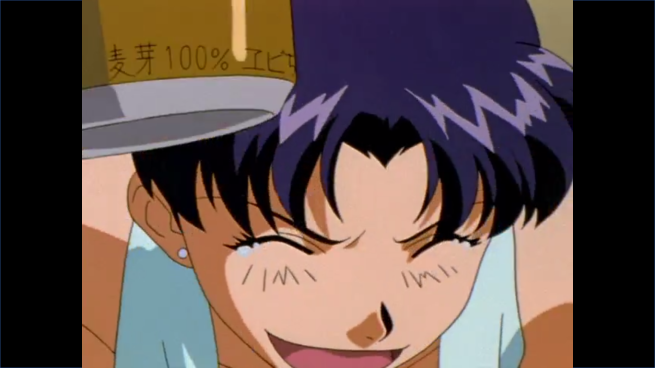 Once this scene ends we get a really funny transition which shows Misato in the morning eating breakfast with Shinji and being the exact same. She’s still loud and bubbly and she still drinks beer! The disbelief of Shinji is the exact same as the audience!

After this event Shinji is forced to go back to real life and his friends change his opinion on Misato’s behaviour at home. They praise him and say that she should be thankful to Misato for showing him that side of her personality. She shows a side of herself that only Shinji can see and it makes him feel happier and it brightens his day. He is also told that the two are a family and that gives him a place of belonging I’m not sure if he’s really felt since very young childhood. 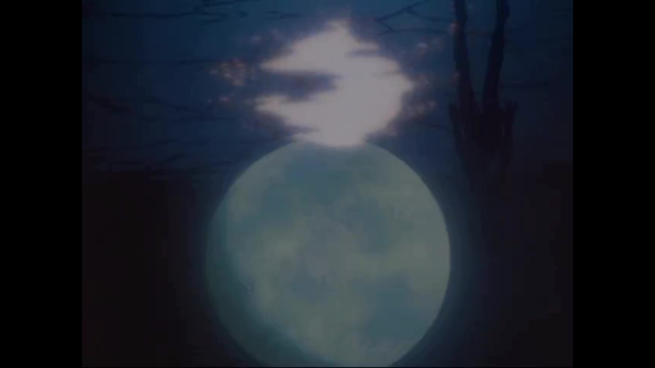 Alright I did say I would talk about the OP if I ever wrote anything shorter than normal so now is the time! The ED is extremely simple and has a shot of the reflection of the moon in water along with a silhouette of a character walking. It’s unclear who the character is though. I take the lyrics and visuals of ED’s quite seriously and the reason why I think the lyrics mean something is that in episode 7 the vocals and background music change to the same song but sang very differently! It makes me think that the song has changed perspective and is switching from my current guess (Rei) to either Misato or the new Eva which will be introduced (yes I watched the new ED so I saw that she’s appearing next episode!) and I quite like that idea.

The song is very quiet, low toned and calming in contrast to the OP. This is probably so the viewer mulls over the content of the episode instead of being whisked away into something that will completely distract them for a long time. The ED is talking about love and I can assume that it’s about the companionship between the character singing and Shinji, what If Evangelion was a secret harem? It would definitely be a cause to write part 13 of the harem series (part 12 is reserved for something else that’s coming when this month ends if I remember; we’ve got a lot of this month left! 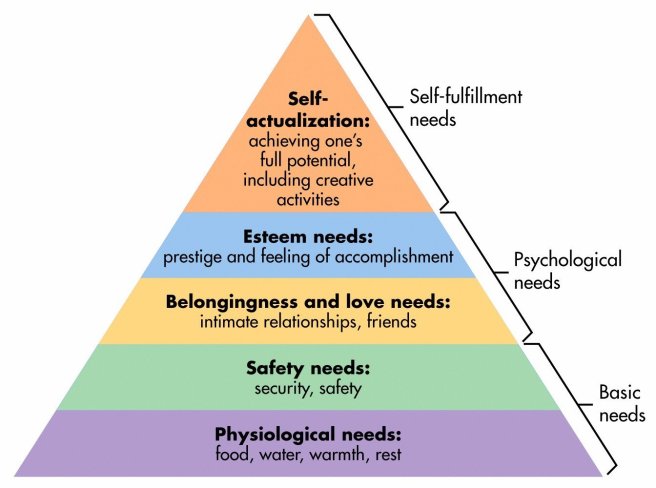 The diagram above shows a human needs triangle for what a human needs / wants to survive. At the bottom we have food, water, warmth and rest, then security and safety. The first non-essential level to survival within humans is “belongingness and love needs” which is what I’m interpreting this song to be about.

Both Rei and Shinji are without love and for a lot of the time I’ve seen them, they’ve had little or no friends either. This obviously results in psychological problems because they haven’t been accepted or loved by enough people for them to feel happy. This song could be an outcry for companionship that both these characters need and haven’t gotten. That’s my interpretation of this song so far, I may release a post talking about the OP and ED’s once I’ve completed the series!