Thank you to everyone who submitted questions for the Q&A! And thanks again for 200 followers.

It has to be Kuroki Tomoko who can make me laugh easily without trying. Yes she’s cringey but I find that sort of thing funny. Other series’ are a lot funnier but I think she is the most funny character. 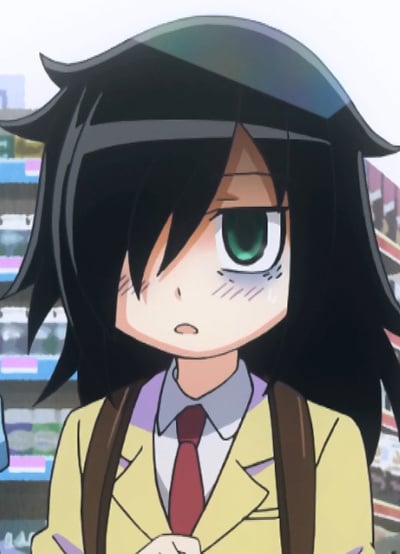 Yeah my discord is RossiRoad#6559 if you want to add me.

So why is my brain completely empty?

Well the idea is that it’s not. Basically when I started blogging I thought it would only last for about a week and I would never keep up with it, so in the few times when someone would visit the blog they might wonder “why did he stop blogging” then see “my brain is completely empty” and go “I see, he’s not got anything to blog about.”

It’s because of that reason that my last post ever on here will be called “my brain is completely empty” to say I’ve ran out of thinks I want to say, see you later. Though at this rate running out of things to say is pretty unlikely.

The best thing for definite is to talk to people and comment, it’s great to have discussion. I’ve always been a very quiet person on the internet, never talking to anyone, and bloggers are the only people I really talk too online except for IRL friends. And it’s great. So talk to people, I really enjoy discussions.

Sakamoto from Sakamoto desu ga? I just think it would be nice to be effortlessly cool all the time!

I started watching anime around 3 years ago. Oddly I got way more into it around when I started and slowly have been getting less interested. I’ve barely watched anything this month so far, just Ghibli films really!

The reason why is hard to answer. I always had an interest in things around anime from playing and watching pokémon. As well as that I had friends who were really into yugioh and I enjoyed those manga’s. Then I got recommended dragon ball and read all of dragon ball and dragon ball Z. I would go to the library (both public and in school) and borrow manga’s like naruto and the less well known Darren Shan volumes and Journey to mount Shen/Iron fist Chinmi. As well as this I read bleach.

Then I stopped completely. I wasn’t really into anime at that point but that’s the background before the event.

I went to a festival kind of thing with my church and another church for five days. In the other church was a really hot girl who liked anime. I was like “hey I like anime (well sort of but not really)” and we talked a lot about it. It became very clear to me that I knew basically nothing and she was an extreme die-hard fan (apparently claiming to watch like 20 episodes of anime a day (which had to be a lie)) that had seen everything except for all the shows I had seen. Like bleach and stuff.

Anyway I was trying to change the subject but every time we did it would just end up back on anime and I would have to bs my way through it. As that festival went on she got ill and was basically in the main tent constantly, as I was also in the main tent constantly playing card games with friends I happened to learn a lot about anime in that time, and realized it was something you could actually be a fan of. The idea of someone being a fan of anime was previously new to me.

So when I came home I watched all the good stuff, like AOT and Death note, as well as fairy tail (which I previously dropped at like episode 15) because she recommended them to me. I thought “eh, this is alright” and just kept on going. And here I am now! (What a mistake)

And there you go, that’s all for the Q&A, thank you for the questions these were all really fun to answer! If you didn’t have time to submit a question then I will just answer it in the comments instead of putting it in the post!