See the kind of joke in the title? Yeah that kind of thing is my favourite.

Yesterday I hoped that I would not be asked for a superlative question, and I thought I had nearly gotten away with it, but I hadn’t.

So if I don’t have an Asian drama, how on earth am I supposed to have a favourite scene?

I remarked that there was a question that could easily be phrased as a superlative, but it wasn’t. It was “Which Asian drama genre do you mostly like to watch?” – it was quite an interesting question to answer, and didn’t make me feel on spot at all, because it was asking me about what I do instead of what I think.

Why couldn’t it just be “Share some pictures from scenes you liked and say why you like them” – it’s much simpler and much easier! So let’s do that.

Ok let’s start with this one. I like this because it’s a funny introduction to the show. The girl has booked a taxi to the audition, however the taxi tells her to go to the wrong one, so she ends up thinking she’s in a shared taxi. It’s funny seeing him bully the guy to move, and watching her slowly realise what she’s done. I like this scene because it takes place after the two main characters reveal that they’re married, yet the girl on the left is in love with the main character still. So it’s about the rivalry between the two, and how they deal with each other. The fight is funny and entertaining to watch, as the girl who is married to the guy can get away with a lot of the things the other girl is calling him out on, with the guy being ok with it, and putting up with it because he loves the girl. I like this scene because revenge is sweet. The girl on the left finds her boyfriend cheating on her on the same day she got cancer, and it’s horrible for her. However it’s great much later, when she comes back with a man she likes much more, and completely humiliates her ex and her ex’s girlfriend, by tricking them, well they trick themselves, but it’s funny. 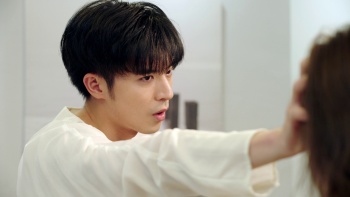 This series of scenes are just sweet, and quite sad as well. The guy here loses his memories for the past two years, which means he forgets the person he’s married too. The girls attempts to make him fall in love with her again are hopelessly bad, however really sweet, and very pleasant to see as it just shows how much she cares.

Ok there you go, I think if I get superlatives from now on I’ll just switch them to something similar enough that I can answer that while still making it seem like I’m actually answering the question. Thank you for reading day 21 of the 30 day Asian drama challenge! Today’s question was “A picture of your favourite scene in an Asian drama”